In September 1923, Tokyo became a hell on earth. In less than three days, a magnitude approximate 7.9 earthquake and subsequent conflagrations reduced nearly half of Japan’s capital to a blackened, rubble-filled, corpse-strewn wasteland of desolation. The human tragedy of over 120,000 killed and 2 million left homeless was matched in severity by the economic cost of the damage inflicted: it was roughly four times larger than Japan’s national budget of 1923.

The disaster did more than destroy. It also compelled reflection and inspired dreams that transformative and lasting changes might result. Many hoped that a grandiose, awe-inspiring capital could be forged from the crucible of catastrophe. Others conjured up plans for the construction of an infrastructure rich city that would allow the state to better manage its citizens. Still others suggested that moral, economic, and spiritual rejuvenation efforts spurred by reconstruction could be used to arrest the perceived degeneration of society. [3]

[00:15:38] Jiro is travelling by train to Tokyo University and accidentally meets the young Nahoko, who becomes his wife years later. A terrifying earthquake ravages Tokyo destroying many areas to the ground and inciting a big fire. Jiro fights through this scene helping Nahoko’s care taker who has broken her leg. He then continues to University that is being consumed by flames.

Just before the dramatic earthquake sequence, the film seems to give us a long enough moment to reflect upon Nahoko and Jiro’s quoting from Valéry: “the wind rises, we must try to live”. We hear the common machinery sound of the train in accordance to the different perspectives shown. With no whistle or any other element to diverge our attention, everything seems to be on pause mode where we naturally follow the train going somewhere, without any exacerbated expectancy. The landscape seems calm and we are provided with a common soundscape: wind rustles matching the picture, some discrete bird chirps, and the water streams seen from above.

But here, the fish wags its tale (*) and not only the earth opens itself cracked, but also the film opens providing the audience a first person perspective (not through any character), through sight and hearing, the happening of such ruthless natural catastrophe.

It is intereseting how human and yet eerie and supernatural the earth sounds breaking with whispers-like as if something has just woken up, resulting in the brutality heard right after with the aligned houses agitating and breaking violently under the titanic trembling of the earth’s ground:

this voice, heard through the visual representation of the earth’s rupture (in the picture above), maintains its pitch during the 5-6 seconds while the underlying sound – also high-pitched but resembling a prolonged sound of fire being ignited (think switching a lighter) – undulating slightly upwards meeting the voice’s pitch by the end. There seems to be human and natural element richness in this unusual approach of sound designing  such catastrophic event. 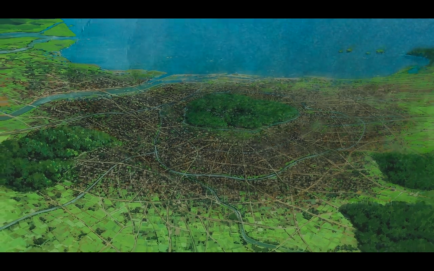 A very brief moment of near silence follows (while the aforementioned sounds fade) lettings us visually contemplate the grandness of the area to be affected, before exploding violently.

It is now that we are in the presence of the horror lived in this earthquake and sound plays such a big role with all its brutality. Different to the traditional approach of western film, the main elements heard are a composition of :

These elements are introduced a couple of frames before we see the houses being ripped apart. 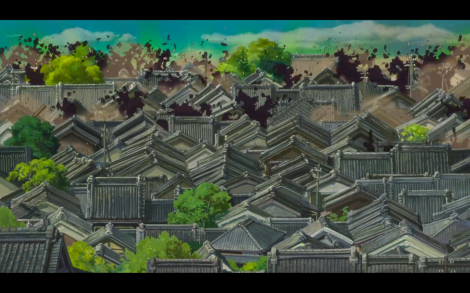 In the next scene the audience is shown, through close-ups, how the ground is animated in brutal waves breaking and disrupting the order of all man-made constructions. We no longer hear the horrifying screams and the sound designer paints the scene with sound of the ground disrupting, by utilising rumbles and earth debris. The sounds here are in the same universe as those indicated on Jiro’s first dream – choir-like sounds mimicking up and down movements, in which the upwards vocalisations are like rising stingers.

We then return to the train where Jiro is travelling which almost lost control but hasn’t fell off the tracks. Now the soundscape has metallic sound elements, with heavy screeching from the high speed at which the train is running. The screams are heard again, perhaps personifying the people on board. It’s them we see next, the passengers trying to protect themselves of the luggage falling on their heads and of the heavy shackling, but curiously the preceding screams are not heard anymore, and over the rumble and some debris we hear greatly crafted voice works that sound both like a supernatural identity and a mimic of the train movements in a complex and dynamic texture. These voices haunt Tokyo like strikes until it calms down – which is seen by the small stones along the train track when they cease their motion.

Perhaps what breaks this sound design scene apart from many others, is the fact that there is much more emphasis on the natural elements than that of the man-made structures, which some of the resulting sounds seem to be built around traditional methods – electricity cables breaking and sparking, the train squeaking against the rails, some of its shaking and the luggages falling, the roof bricks sliding down the houses – mostly sounds on the medium-high pitch range – and some impact sounds. If one listens closely all the incredible vocalisations brilliantly constructed and mixed here could certainly be part of a horror film, in another time, in another context. In The Wind Rises, it conveys the ruthless natural elements an identity, reminding sometimes of a colossal lonely monster, living somewhere on the depths of the earth…

A quasi-silence soundscape dominated the pictures just after the small stones quiet down. No signs of panic – no screams or a lot of exaggerated agitation. The scene is focused on Jiro helping Kino, the woman he just met on the train that has broken her leg. However, listening carefully, there is a melodic wind with a regular pulse, that has started off when the small stones moved for the last time. It sits on the scene for long and it acts as a bed for many other elements to come. A whispering like wind sound when the audience sees the brutally silent overview just before we hear a loud infant crying from distance. This silent moment conveys a very unsettling sensation and it can be the prelude for the big fire to come.

[00:17:49] Jiro is mending Kino’s broken leg when we hear a profound low groan that agitates the ground sightly and brings the wind to rise. This vocal groan is heard three times and is preceded by a subtle crescendo tone that is part of the soundscape from the moment Jiro starts working on Kino’s leg. There are three main elements we can point out:

Jiro, Kino and Nahoko walk towards Tokyo and on the way we are shown some of the damage inflicted. The sound composition for the fire seen in the picture bellow is of a ferocity that the picture alone in its realistic depiction couldn’t suffice. Following the interpretation of the earthquake and natural elements as a personified beast, this short 3 second segment is made of horrifying sounds that don’t even resemble fire, but again it could be of an evil creature screeching being burnt down to death. We also hear the tone of a voice similar to what we have been hearing ever since Jiro had his first nightmare. All of this, of course, accompanied by an intense low rumble. The screeching feauture is prolonged through the transition to the next shot, where Nahoko is carrying Jiro-‘s case and hat, by crafting into a a melodic eerie wind that’s faded out softly for the following 7-8 seconds, in contrast with the brutal cut with the frame that introduced this view. 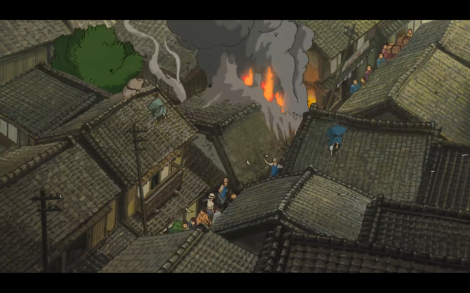 [00:18:49] Interestingly, here the fire on the house’s roof has a very realistic sound representation (clear flame sounds, some very subtle cracking with no added personification or stylised elements), and that might be due to the fact that immediately after Jiro looks into the sky and has a brief vision of airplanes with the Italian flag colours crossing the sky amid very dense clouds and pieces of burnt debris. Even this scene is sound designed softly with just a long wind gust crossing and transitioning over the following cut.

[00:19:13] All the people continue to move and are now passing through an area surrounded by trees. There is a significant change on sound to represent the wind flowing through the tall dense trees in comparison to the previous scene on the train tracks and it relies mostly on the texture given by the leaves rustling.

The camera lateral movement shows the audience a broad perspective of the thousands of dislocated people and, this time, without a sound warning as before, three groans are again heard shaking the earth, which is represented by increasing in level the tone of the ongoing low rumble. We hear that something begins to crack and the picture then cuts to the temple entrance where we can see the three pillars bending, but it’s the temple that collapses in itself very quickly. On the precise moment of breakage, the sound approach applied is the same as of when Jiro in his first dream is hit by the anthropomorphic bomb (click here to read about that moment with more detail). An amount of dust from debris is released from the temple as it collapses which is personified with a sscchhhh sound, almost like the steam of a train.

All along this scene, despite the natural horror of such catastrophe there seems to be a rather calm atmosphere whenever Jiro is trying to comfort Kino. This is achieved by reducing either the number or the quality of natural elements on the soundscape. And as with many moments throughout the film, it is about ornamental subtleties that shape the scenes.

In the moment Jiro leaves to find Kino’s family, we are shown the strength and extension of the damage. 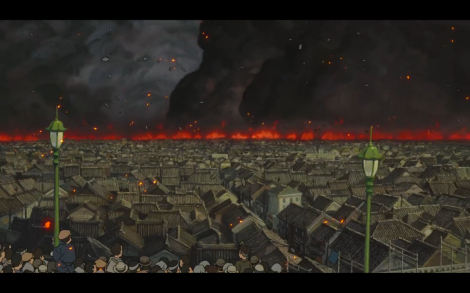 This damage sounds like a enormous creature’s awakening roar which dissolves into a deeply agonising choir layered on the ever present low rumble. This choir has a mid-low range and the vocalisation seems to move from ‘o’ to ‘a’ in an ascendent movement. There is however the illusion of disorder, like a music canon where groups of singers start in different times, forming a cloud of sounds (similar to Clocks and Clouds by Gyorgy Ligeti) It is highly dramatic, dissonant and intense for the whole 40 seconds that it might be aimed to cause an unsettling on the audience.

When Jiro and Nahoko reach a safe place this cloud is over and even the low rumble quiets down, giving room for a relief moment.

The entire scene described has no music at all, and it’s arguable if the incredible soundscape is indeed musical.

buy me a coffee