The series of posts on this subject comprise an attempt to understand everything about recording with contact microphones, including some light insights on  physics and       electronics.

I’ll keep to an organization with small posts for each specific subject. Any comments or questions are welcome (which doesn’t mean I am an expert of any kind…).

First, contact mics pick up audio vibrations through solid objects! Saying they pick up mechanical energy to then transform it to electric energy. As Tim Prebble mentions on his great post you can scream at it and record nothing.

Now, a bit of physics that helps to understand the surprising results of a successful recording with a contact microphone: on solid objects both longitudinal and transversal waves (a wave in which the vibrations are at right angles to the direction of propagation of the wave) propagate through it, but at different speeds. The molecules that constitute a  solid object have a higher degree of ordination (compared to air, for example) and they also act in transverse motion: if a sound wave goes through a solid object, its molecules will move back and forth, like in air propagation, but they will also move transversally! This happens when a longitudinal wave hits an interface at an angle, which will cause that some of the energy can cause particle movement in the transverse direction to start a transverse wave [2]. Understandably , the forces for transversal motion between the object’s molecules are usually inferior than the force of longitudinal waves [1].

The expression below represents the propagation speed of a mechanical wave through a medium (Benade, 1990; Benson, 1996):

We can see that the speed of longitudinal waves in a solid is independent of its dimensions.

The same does not happen with transverse waves: [3] 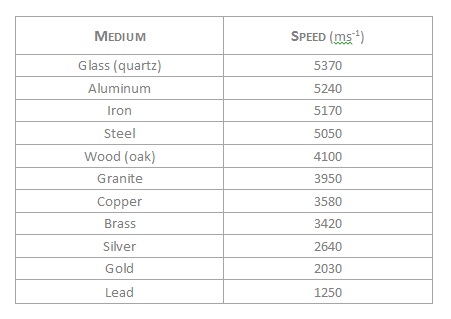